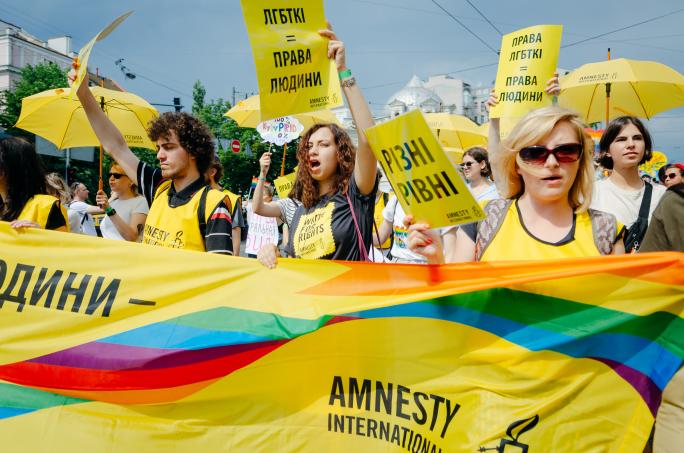 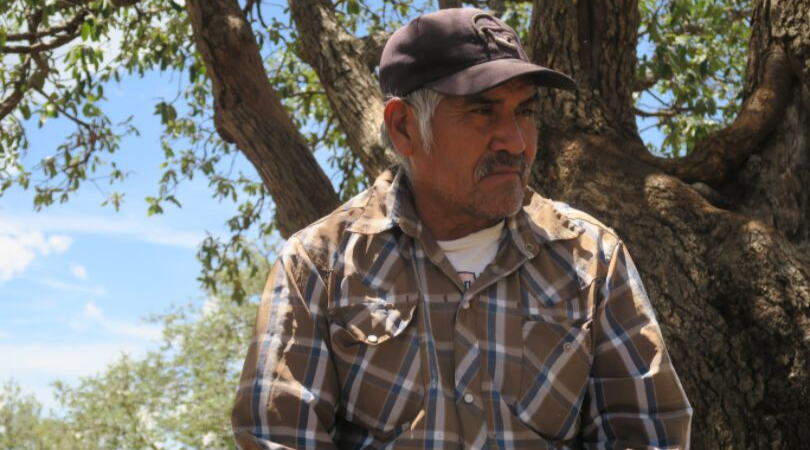 As a tribute to Julián Carrillo, an environmental rights defender killed in October 2018, we launched Caught between bullets and neglect, a digest on Mexico’s failure to protect environmental human rights defenders. Just a few hours after the launch, two suspects in Julián’s murder were arrested, showing the immediate impact Amnesty can have on justice.

Rahaf Mohammed al-Qunun, an 18-year-old woman from Saudi Arabia, was granted protection and access to UNHCR in Thailand after fleeing violence, abuse and death threats from her family in Saudi Arabia. Our persistent work on her case contributed to a wonderful outcome with her being granted asylum in Canada, where she is safe.

The Angolan Parliament approved a revision of the Criminal Code to remove a provision widely interpreted as a criminalization of same-sex relationships. They even took a step further, by criminalizing discrimination against people based on sexual orientation – the first country in 2019 to make this move! 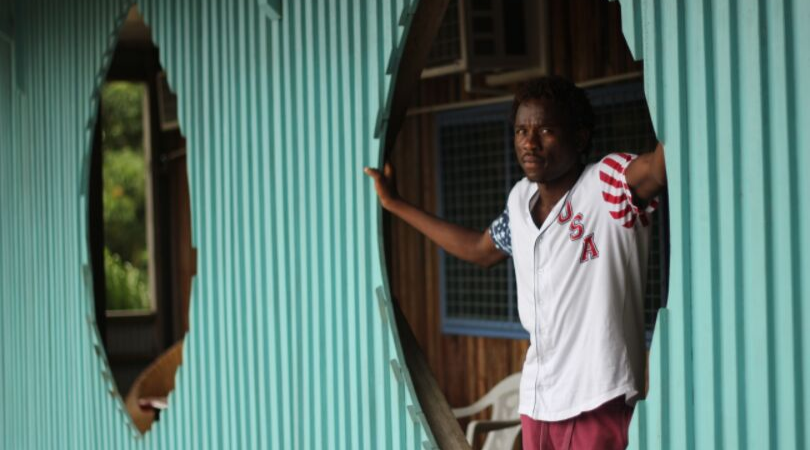 Abdul Aziz Muhamat, a Sudanese refugee activist detained on Manus Island since 2013, was awarded the 2019 Martin Ennals Award. Abdul featured as a Write for Rights case in 2018 which increased international recognition of him as a Human Rights Defender. Earlier this year his asylum claim was recognized in Switzerland where he was given permanent residency.

After spending 76 days in detention in Thailand, refugee footballer Hakeem al-Araibi was able to return to his home in Melbourne on 12 February. The Bahrain-born footballer had been detained upon arrival in Bangkok on 27 November 2018, due to an erroneous Interpol red notice. A campaign launched by Amnesty and other groups to free the footballer, a peaceful and outspoken critic of the Bahrain authorities, grew into the #SaveHakeem movement, spanning three continents, engaging footballers, Olympians and celebrities, and drawing the support of more than 165,000 people.

Australia finally passed a law facilitating the transfer to Australia of refugees detained on Manus Island and Nauru who require urgent healthcare. Amnesty, as part of a coalition of people and organizations, alongside the work and courage of the refugees themselves, helped achieve this tremendous step forward.

Following international attention and campaigning by Amnesty, Saudi authorities overturned the call by the Public Prosecution to execute Saudi woman activist Israa al-Ghomgham for charges related to her peaceful participation in protests. Israa al-Ghomgham still faces a prison term and Amnesty continues to campaign for her immediate and unconditional release. 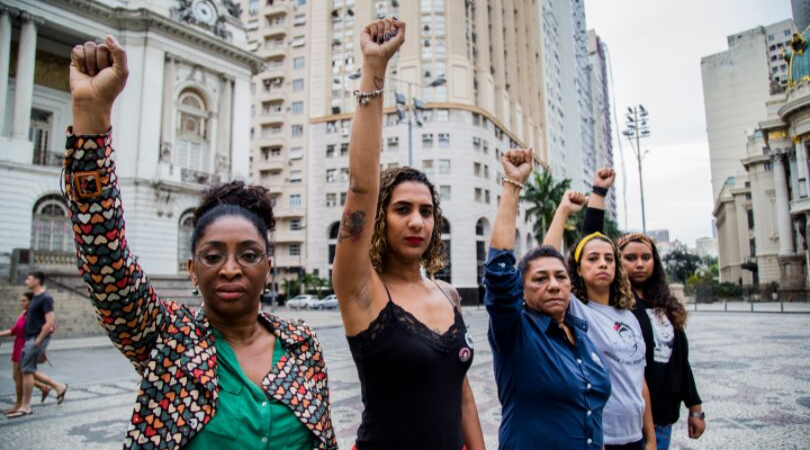 Just before the one-year anniversary of the killing of Marielle Franco, a prominent human rights defender from Brazil, police arrested two people in connection with her murder. It marks the first sign of real progress in the case, which Amnesty had been campaigning on for a year.

Just days after Amnesty and other NGOs raised alarm about a draft cybercrime law that would seriously undermine freedom of expression in Iraq, the Iraqi parliament chose to withdraw the bill and confirmed to Amnesty that its “concerns have been heard”. Amnesty had also called on the Kurdistan Regional Government (KRG) in Iraq to drop all charges related to freedom of expression against journalists and activists that had been arbitrarily arrested following protests.  The same week, all those detained were released and the KRG issued a statement clarifying they had been released in response to Amnesty’s calls.

During the latest UN Human Rights Council session, a landmark resolution was adopted recognizing the important role of environmental human rights defenders. In an encouraging move, it also called for states to provide a safe and empowering environment for initiatives organized by young people, such as the school climate strikes.

After the publication of Amnesty’s investigation The Hidden US War in Somalia: Civilian Casualties from Air Strikes in Lower Shabelle, AFRICOM admitted for the first time ever that its air strikes have killed or injured civilians in Somalia. This report opened an investigation and review on the air strikes, culminating with the publication of US military documents that confirm they knew of further civilian casualties resulting from many of their air strikes in Somalia. 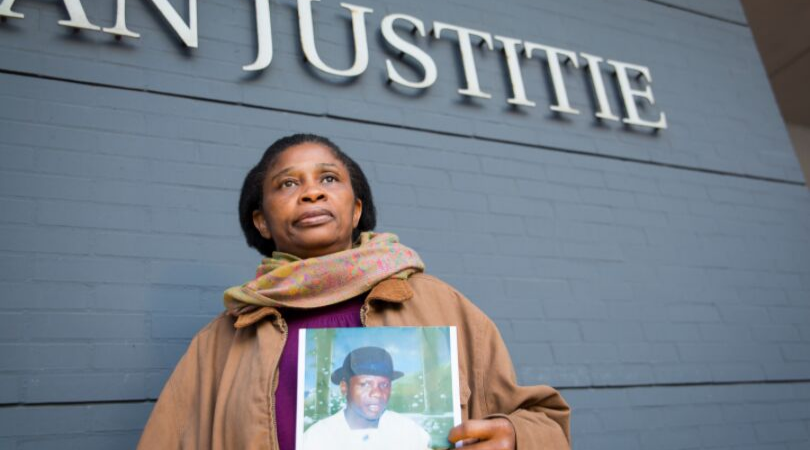 Two years ago, Esther Kiobel and three other women took on one of the world’s biggest oil companies, Shell, in a final fight for justice. Esther has pursued the company for more than 20 years over the role she says it played in the arbitrary execution of her husband in Nigeria.  Amnesty shared over 30,000 solidarity messages with Esther Kiobel and in April, The District Court of The Hague issued an interim ruling in favour of the women. According to the ruling, the court does have jurisdiction to hear the case and the claim is not  time barred.

“We salute Esther Kiobel, Victoria Bera, Blessing Eawo and Charity Levula. It’s only because of their courage and persistence that we’ve got this far,” said Mark Dummett, Researcher on Business and Human Rights.

Mozambican journalist Amade Abubacar, arbitrarily arrested in January and held in incommunicado military detention and in pretrial detention for more than 90 days, was granted provisional release following a sustained campaign by Amnesty. He continues to fight trumped up charges and we continue to push for the government to drop all charges against him.

The Constitutional Court of South Korea issued a landmark ruling ordering the government to decriminalize abortionand reform the country’s highly restrictive abortion laws. By the end of 2020, South Korea’s law on abortion must be revised – a win for supporters of equality, women’s rights and bodily autonomy all over the world. 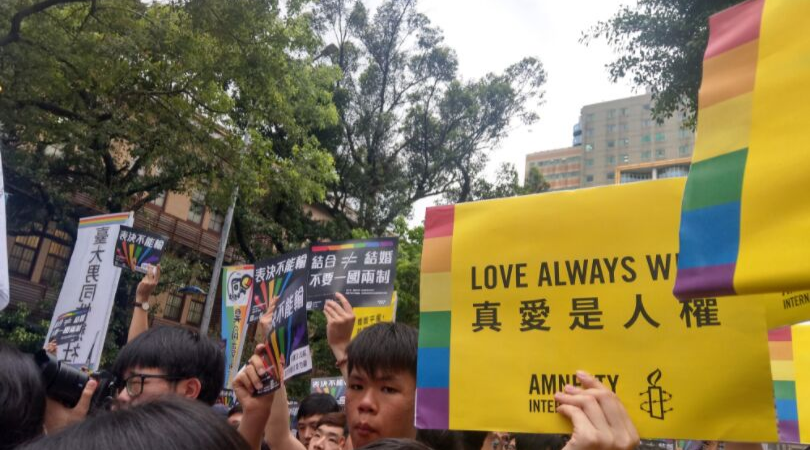 Taiwan became the first country in Asia to legalize same-sex marriage after passing a historic law on 17 May, with the first weddings taking place on 24 May. Together with LGBTI rights groups from Taiwan, Amnesty had campaigned for this outcome for many years. As well as legalizing same-sex marriage the law allows for limited adoption rights for same sex couples. This huge step forward for LGBTI rights in Asia was celebrated by Amnesty and its supporters.

Gambia’s President Adama Barrow commuted the death sentences of 22 prisoners to life imprisonment. This followed an Amnesty International mission to Gambia to present to the authorities a series of recommendations covering 10 areas of reform to protect and promote human rights. The recommendations include the abolition of the death penalty and commutation of all death sentences to terms of imprisonment.

The World Health Organisation moved to end the categorisation of trans-related conditions as mental and behavioural disorders, which means that transgender people will no longer be considered mentally ill. Amnesty has campaigned for legal depathologisation and acceptance for those who identify as transgender or as gender diverse since 2014.

Human rights pressure played a role in FIFA’s decision to abandon plans to expand the 2022 Qatar World Cup to 48 teams, which would have involved adding new host countries in the region. Amnesty worked together with a coalition of NGOs, trade unions, fans and player groups calling attention to the human rights risks of the expansion, including the plight of migrant workers building new infrastructure, and demanded FIFA uphold its corporate responsibility to respect human rights and its own human rights criteria. This success shows how impactful collaboration can be and how together we can use human rights to hold powerful corporations to account. 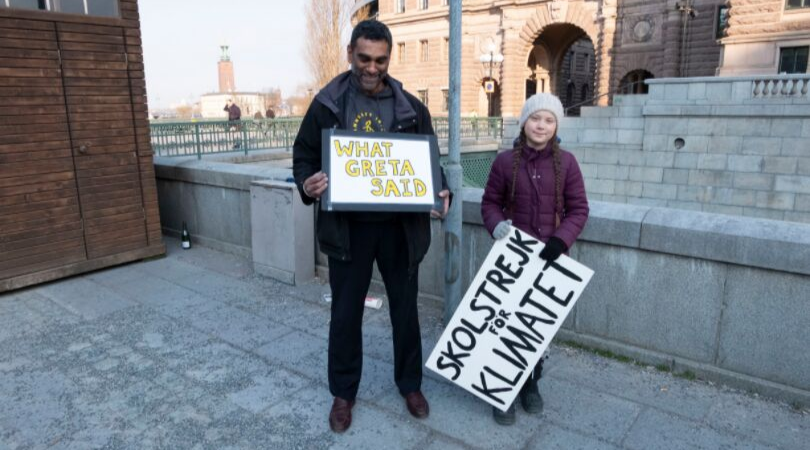 Climate change activist Greta Thunberg and the Fridays for Future movement of school-children were honoured with Amnesty International’s Ambassador of Conscience Award for 2019. This is our highest honour, celebrating people who have shown unique leadership and courage in standing up for human rights.

There were some important breakthroughs on the arms trade, as Canada became the 104th state party to join the Arms Trade Treaty. Following Amnesty’s tireless work to stop arms transfers to the Yemen conflict, the UK appeals court issued a landmark ruling in May declaring the UK government’s decision to continue licensing exports of military equipment to Saudi Arabia unlawful, following a judicial review brought by CAAT, with Amnesty HRW and others as interveners. The United States Senate voted to block $8 billion worth of emergency arms sales to the Saudi and United Arab Emirates-led coalition in May. Belgium cancelled several arms export licences for Saudi Arabia and ordered an investigation after we revealed Belgian arms used by militia groups. Similar decisions followed in Italy and in Switzerland culminating with the UN General Assembly passing a resolution to work towards international laws to ban the trade in tools of torture and tighten regulations for equipment used to police protests.

After Hong Kong police used violent tactics against protesters, Amnesty International swiftly produced a briefingverifying evidence of excessive force against the largely peaceful protests. The briefing was widely circulated within Hong Kong, and around 46,000 actions were taken on the online campaign within a few days.

Following attention on the case, Saudi authorities overturned a call by the Public Prosecution to execute Murtaja Qureiris, a young Saudi man who was arrested at the age of 13 for offences he allegedly committed when he was 10.

Greece changed the law to recognize that sex without consent is rape, in a long overdue move, and Denmark’s government committed to do the same. This development is testament to the persistence and bravery of survivors and campaigners, and creates real momentum across Europe following Amnesty’s report on the barriers to accessing justice for rape survivors.

Tom Ciotkowski, a British human rights defender charged with contempt and assault for documenting abusive police behaviour while helping refugees and migrants in the French town of Calais, was acquitted. 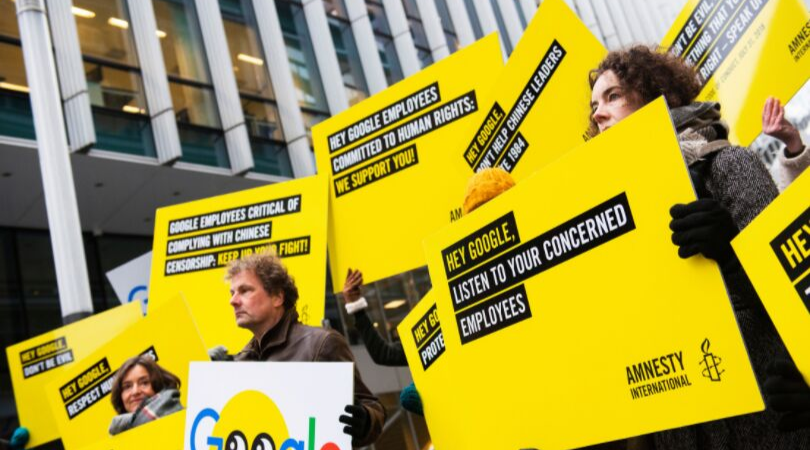 In a US Congressional hearing, a senior Google executive gave the clearest confirmation yet that the company has “terminated” Project Dragonfly, its secretive programme to develop a search engine that would facilitate the Chinese government’s repressive surveillance and censorship of the internet, following Amnesty’s DropDragonfly campaign, and hundreds of Google staff speaking out.

Through a combination of media work, supporting demonstrations and lobbying work, Amnesty International mounted a campaign in Sri Lanka, which was successful in temporarily stopping what would have been the country’s first executions in 43 years. The Supreme Court will resume its consideration of the case that resulted in the order to stay the executions at the end of October. 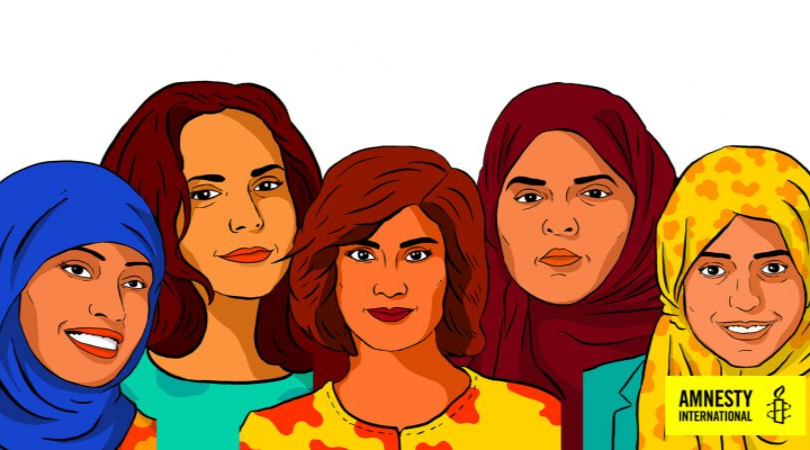 For decades, Amnesty has highlighted the rampant discrimination faced by women in Saudi Arabia under the country’s repressive male guardianship system. In August, Saudi Arabia announced major reforms easing some of the major restrictions imposed on women, including allowing them the right to obtain a passport which should make it possible for them to travel without permission from a male guardian. The changes also grant women the right to register marriages, divorces, births and deaths and to obtain family records. While we welcome these changes, people campaigning for women’s rights remain in prison and we must do all we can to fight for their freedom.

Following the release of Mauritanian blogger Mohamed Mkhaïtir, who was sentenced to death and held in arbitrary detention for more than five years after publishing a blog on caste discrimination, he said: “Without your efforts, I would not have been released. During five years in prison, I just saw the sun six times. So much has changed over the past five years and I am still adjusting to life outside of prison. Now I am free, my hope is to resume my education and return to school.”